Propaganda is the wheel by which the government steers the bus of a nation; typically driving it into war or off the cliff of humanity. It is amazing to see how many people who are otherwise rational human beings will blindly follow the herd on the matter of how subhuman a perceived national enemy is.

Some general facts about Islam might help break the noose of wartime propaganda that rests around America’s neck. Below are a list of statements this journalist has seen in the last week on social media, followed by the data to put that statement in perspective.

“All [or most] Muslims are terrorists.” 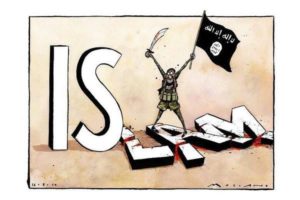 There are 1.6 billion Muslims in the world. The much-discussed ISIS (Idiot State of Ignorance and Sexual-Depravity) organization, which has been described as the “richest terrorist group in the world” can only field between 7,000 and 15,000 troops in its battle to create a fundamentalist homeland. Even taking the highest estimate of their troop strength means that fewer than 1 out of every 106,000 Muslims from all over the world are actually willing to take up arms and fight for the fundamentalist dream. The Iraqi army, however, can field 250,000 soldiers to fight against that fundamentalist vision. That figure does not include irregular forces allied to the Iraqi army. The premise that all Muslims are terrorists falls flat by a mere study of the numbers. It isn’t a majority of Muslims. It isn’t even 1% of Muslims.

While many Muslims believe in Sharia law, what is considered Sharia law is not universal. In Lebanon, which has been considered a hotbed of Islamic terrorism ever since the bombing of the US Embassy in Beirut, 38% of Muslims don’t even believe it is the Word of God. Among those that do believe it to be the direct Word of God, only 29% believe in making it the legal system for the country, and a majority of Lebanese Muslims don’t believe Sharia law should apply to non-Muslims.  Even among those that believe whole-heartedly in Sharia law, they don’t necessarily believe in some of the more violent aspects. The crime of adultery is punishable by stoning under some forms of Sharia law. Some quick and simple math shows that in Lebanon, less than 3% of Muslims believe that punishment should be applied to the population at large. Meanwhile in America’s heartland, a political candidate has advocated or silently endorsed the idea of stoning homosexuals.  The vast majority of Muslims believe that Sharia law should be used to settle family or property disputes among Muslims.

Some countries have higher rates of belief in using Sharia law, and some have lower. Lebanon was chosen because it falls in the middle as far as averages go.

“They beat their women.”

First, the very phase “their women” suggests that the individual might fall close to the more radical elements of Islam in regards to the belief that women are property. Yes, some Muslim men beat “their women.” In the United States 25% of women will be beaten by “their men” in their lifetime. This is not an Islamic issue, this is an issue rising from the idea that women are property and somehow belong to the men. If this is justification for war, the United States might consider invading Belfast, where 60 cases of domestic violence are reported daily.
I will point out that the best example for all Muslims is Muhammad ibn ‘Adullah (salallah ‘alaihi wasalaam), the Messenger of Allah & the best example.

“ The Best Of You Are Those Who Are Best To Their Women.”

And this is but one example of many with same or similar wording & meaning.

“They are stuck in the Stone Age, and they want to stay there.”

This statement marginalizes the thousands of Muslim men and women who sit in prison for attempting to change their government and those that died in the attempt. Political prisoners throughout the Arab world sit rotting away for attempting to bring about change in their nations. They are Muslims. Four Saudi Princesses were at one point being starved to death by the King for speaking out in favor of women’s rights. Countless journalists and bloggers sit behind bars for questioning their governments. The US government continually props up these brutal dictatorships with multi-million dollar arms deals and keeps the power in the hands of those that don’t want change.

Most historians agree that Aisha and Muhammad were married after she reached puberty. They place her age, on average, around 9-13 years old at the time of marriage, though she may have been betrothed to him much earlier. Americans need to keep in mind that while they might not have heard of Islam prior to September 11th, Muhammad lived in the early 600s A.D. It might surprise them to learn that marriage at such an early age was extremely common not only in the Arab world, but the Western world as well (most often to strengthen tribal, family or country ties). King John of England married a12-year-old around 1198. Romeo’s love, Juliet, was only 13. No subset of people is more hated in the West than pedophiles. An attempt to cast the founder of the perceived enemy as a pedophile would certainly benefit the war effort.

Does it occur in the Muslim world? Sure. It occurs in the United States as well, typically deep in America’s heartland. The Catholic Church is well-known for its abuse of the youth. Again this is a worldwide issue, not an Islamic one. There is not a single Middle Eastern country listed among the top 20 nations with a high prevalence of child brides.

Most of the information that is spread via social media is simply not accurate. It only serves to plant the idea in the American psyche that somehow the United States must save the Muslims from themselves. The goal of this propaganda is to make Americans believe that Muslims are somehow lesser people. After all, it’s easier to condemn people to die in air strikes if they aren’t really human. Before clicking the share or retweet button on an inflammatory article, try to determine if the information being presented is an accurate portrayal of the Muslim world, or if you are simply furthering the government’s march towards war.

The Islamic world is not without its problems. The struggle for equal rights for women and homosexuals continues to meet roadblock after roadblock on the streets of Amman, Damascus, Riyadh, and Tehran; however, if the United States seeks to use this as justification for intervention, maybe it should invade Mississippi or Arkansas.