The religion of the attackers who went on a shooting rampage in California should not be become the main focus of the investigation, critics say, after the FBI announced the deadly assault was an “act of terrorism”.

Fourteen people were shot dead and 21 wounded after Syed Rizwan Farook and his wife Tashfeen Malik allegedly stormed a party in San Bernardino attended by his co-workers and opened fire on Tuesday. The couple were later killed in a shoot-out with police. 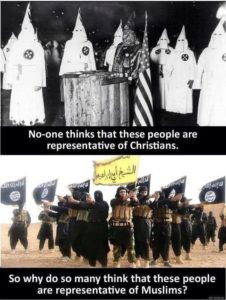 Lawyers for Farook’s family noted media coverage has quickly moved to portray the attackers as Muslims, while past shootings by those of other religions never brought their faith to the forefront.

“He [Farook] was an isolated individual without any friends,” lawyer David Chesley told reporters on Friday.

“When a Christian goes to shoot up an abortion clinic, the headlines don’t say ‘extremist Christian Catholic’ just like every headline is saying ‘Muslim massacre’ or ‘Muslim shooters’.”

Chesley noted while the FBI announced on Friday that the massacre was an act of terrorism, it did not say it had direct evidence of links to the Islamic State of Iraq and the Levant (ISIL).

READ MORE: FBI: US attack and ‘act of terrorism’

US-based law professor Khalid Beydoun told Al Jazeera there are violent “fringe elements” within the Muslim-American community, but he noted the same goes for other ethnic or religious groups in the United States.

Beydoun said more than 350 gun crimes this year in the US were carried out by white men, while 63 percent of mass shootings have been committed by white males since 1982.

“This conversation needs to happen across racial lines, across religious lines… One religious community should not be indicted, and that’s the narrative being shaped right now within the popular media space,” Beydoun told Al Jazeera.

Meanwhile, in the first poll on views of Muslim Americans taken after the mass shootings in Paris and San Bernardino, a Reuters/Ipsos poll showed 51 percent of Americans view Muslims living in the US the same as any other community.

Only 14.6 percent said they were generally fearful.

“If terrorism is designed to create a larger gap between Muslims and Westerners, unfortunately they’re succeeding,” Jamal said. “The threat of terror is going to be fought by Muslims and non-Muslims together. You would like to see those gaps close so people are working together and not being fearful.”