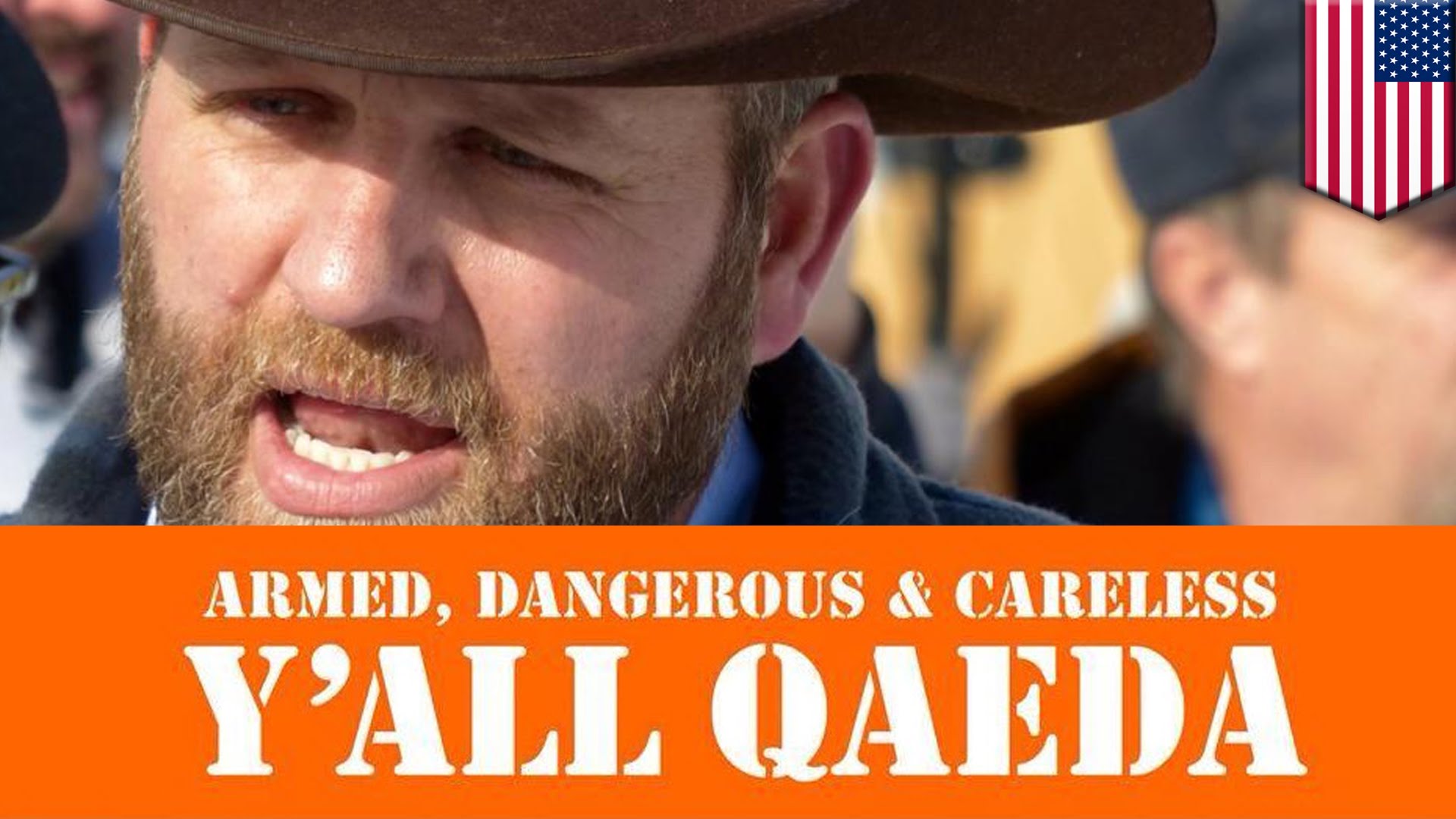 A group of white separatist domestic terrorists have occupied the Malheur National Widlife Refuge Building in Burns, Oregon, fronted by the racist terrorist leader Cliven Bundy, who organized supporters to point sniper rifles at federal officers without any consequence in Nevada last year.

The local and state cops didn’t even come by the scene of the occupied building the first day. It’s a stark contrast with the heavily armed police turnout for last week’s peaceful #blacklivesmatter protest at the Mall of America.

The terrorists have turned out in support of Dwight and Steve Hammond, local ranchers who were convicted of arson after setting repeated fires, purportedly to control invasive species, that spread to adjacent federal land. Prosecutors say that the fires were set to cover up evidence of illegal deer hunting. The men had served a one-year sentence, but were to be re-imprisoned following a successful federal appeal of their sentences.

The shenanigans around the Hammonds’ sentencing prompted Bundy’s son and some of his allies to set up a headquarters in Burns, and to call for violence against the US government to prevent the Hammonds’ re-imprisonment. The Bundy-led terrorists say that they plan to permanently occupy the Malheur building.

The militiamen broke into the federal building with supplies, including food and a generator. Cliven Bundy spoke to his son, Ammon Bundy, on the phone after they occupied the building.

“He told me that they were there for the long run. I guess they figured they’re going to be there for whatever time it takes—and I don’t know what that means,” Bundy said. “I asked him, ‘Well how long can ya, how long you going to stand out there?’ He just told me it was for long term.”

Who Wants A Burns Standoff? Not The Sheriff, The Ranchers, Or Even Cliven Bundy

The Hammonds have said they will report to prison Monday for a five-year sentence. Bundy said his son felt obligated to intervene on behalf of the Hammonds.

“That’s not exactly what I thought should happen, but I didn’t know what to do,” Bundy said. “You know, if the Hammonds wouldn’t stand, if the sheriff didn’t stand, then, you know, the people had to do something. And I guess this is what they did decide to do. I wasn’t in on that.

The occupiers claim to have up to 150 in their group. More likely it’s just a dozen or so, according to one witness. Their intent? According to their own leaders, they intend to “provoke a standoff with the federal government” and to “lay my life down in order to fight tyranny.”

Really? Their chosen site for this “showdown” is a ranger station, which spends the majority of its time protecting wetlands for migrating water fowland restoring aquatic and forest lands.

Wow, these losers are really macho, aren’t they? 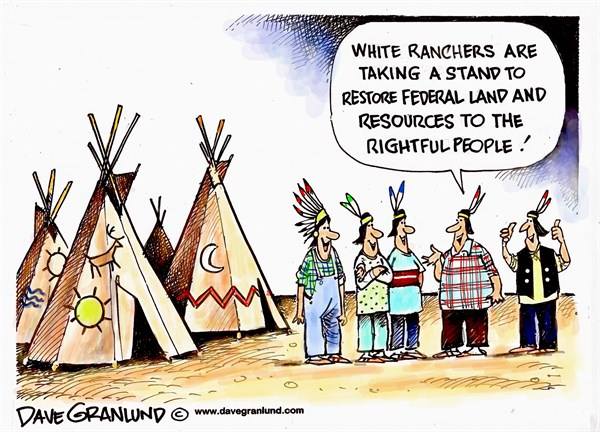 And the only “tyranny” here is a bunch of armed now-felons terrorizing the local community.

But, hey, there is a long history of militia members and groups committing crimes and plots, including murder, insurrection and even genocidal schemes. So it’s not as if this is totally unexpected. In most countries, “citizen militias” would be outlawed for what they are: homegrown terrorist organizations. This is just the latest and perhaps most flagrant of examples.

This occupation follows a peaceful parade by around 100 anti-government sympathizers earlier in the day in Burns, Oregon, organized by a small-time, right-wing talk show host.

They met in a Safeway parking lot to deliver speeches, marched a mile to the home of one of the convicted ranchers they support, then drove to the local sheriff’s office to throw pennies at the building, for some reason (which were quickly snatched up by a couple of girls), before returning to the Safeway parking lot.

The whole justification that these men have for their crime is supposedly to fight for the rights of the Hammond family and other local ranchers, according to the Bundy family blog.

Related: Inside the Oregon Militant Standoff

Naturally, being felons themselves, they would support other convicted felons. You see, the two Hammond men, Dwight Lincoln Hammond, 73, and his son, Steven Dwight Hammond, 46, were convicted of poaching and arson on federal land. From the district attorney’s statement:

The jury convicted both of the Hammonds of using fire to destroy federal property for a 2001 arson known as the Hardie-Hammond Fire, located in the Steens Mountain Cooperative Management and Protection Area.

Witnesses at trial, including a relative of the Hammonds, testified the arson occurred shortly after Steven Hammond and his hunting party illegally slaughtered several deer on BLM [Bureau of Land Management] property.

Jurors were told that Steven Hammond handed out “Strike Anywhere” matches with instructions that they be lit and dropped on the ground because they were going to “light up the whole country on fire.”

One witness testified that he barely escaped the eight- to ten-foot high flames caused by the arson. The fire consumed 139 acres of public land and destroyed all evidence of the game violations.

After committing the arson, Steven Hammond called the BLM office in Burns, Oregon, and claimed the fire was started on Hammond property to burn off invasive species and had inadvertently burned onto public lands. Dwight and Steven Hammond told one of their relatives to keep his mouth shut and that nobody needed to know about the fire.

An August lightning storm started numerous fires and a burn ban was in effect while BLM firefighters fought those fires. Despite the ban, without permission or notification to BLM, Steven Hammond started several “back fires” in an attempt save the ranch’s winter feed.

The fires burned onto public land and were seen by BLM firefighters camped nearby. The firefighters took steps to ensure their safety and reported the arsons.

The Hammonds had initially served a small amount of time in prison for their crimes, not fulfilling the five-year minimum sentence required by law (see ruling here). So now they have been resentenced, and the jury consisted of peers from their area.

Did the Bundys or the militia care one iota about this case when it first happened? Nope. They didn’t do a thing. It’s only now that they have a “call to action.”

But here’s the truly laughable part: The Hammonds don’t want the militia there! They put out a statement, through their lawyer, publicly distancing themselves from the Bundy family and their actions and saying they are willingly submitting to the sentencing.

And many in the local community have come out in opposition to the militia activities. According to a local television news report:

“I want them to go home,” resident Bee Bee Sitz said. “We take care of ourselves.”

Another resident, Kainan Jordan, said, “I don’t think all of these outsiders coming here is necessary. I think they intimidate the local people.”

From a CNN article:

“I don’t like the militia’s methods,” local resident Monica McCannon told KTVZ. “They had their rally. Now it’s time for them to go home. People are afraid of them.”

This plot is so ill-conceived and so specific to the Bundy schemes that even the Oath Keepers, a militia group that is typically at the center of most pro-gun and insurrectionist plots, such as their recent attempt to provoke a “war” with the government over a small gold mine in southwest Oregon, have distanced itself from the whole effort.

From a statement by their founder:

Because the Hammond family does not want an armed standoff, and they wish to turn themselves in, Oath Keepers will not take part in any attempt to create a standoff in Burns, Oregon….

[I]f they don’t want their family in the middle of an armed standoff and have decided it is best to just go back to prison, no patriot group or individual has the right or the authority to force an armed standoff on the Hammond family, or around them, against their wishes. You cannot help someone who does not want your help, and who are not willing and ready to take a hard stand themselves….

This org cannot and will not force itself on a family who does not want the help.

I can’t imagine a more pitiful example of a “revolution” than this. Not only do the Hammonds and the community not want the militia there, but the crime is taking place in one of the most remote and sparsely populated areas of Oregon, at a time of year when no one goes there, and in a month when the temperatures are at the lowest.

At the time I’m writing this, it is -1 degrees Fahrenheit. Good luck staying warm, felons, particularly after your electricity is cut and any fuel for your generators (if you have any) runs out.

Ryan Bundy says he is “willing to kill or be killed” in defense of the occupation. In response, out of concern for the safety of children, the local schools will be closed for at least the next week.

The author of an article in Esquire, titled ” What’s Happening in Oregon Is Nothing More Than Armed Sedition,” calls out the actions of these out-of-state militia extremists for what they are:

This is an act of armed sedition against lawful authority. That is all that it is, and that is quite enough. This is not “an expression of anti-government sentiment….”

These are traitors and thieves who got away with this dangerous nonsense once, and have been encouraged to get away with it again, and they draw their inspiration not solely from the wilder fringes of our politics, either.

Ammon Bundy and his brothers should have been thrown in jail after they gathered themselves in rebellion the first time.

It’ll be interesting to see how law enforcement and the government respond to this situation in the coming days. The insurrectionists and Bundy family clearly want a shoot-out to occur, à la Ruby Ridge, making them some sort of “martyr” to their extremist cause.

But I’m guessing that if they don’t fire first, they are more likely to be surrounded in a siege until they either give up or they freeze to death. Assuming they survive, it is comforting to know that their new felon status will prevent them from legally purchasing or possessing firearms.