Daesh (in Arabic) are the initials for ‘Dawla al-Iraq wa Shaam al-Islaami. [Islamic state of Iraq and Shaam(1) & in English termed as ISIS (2)] (3) 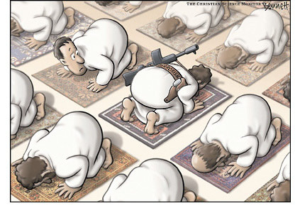 I have been informed from the trustworthy people of Shaam:

That if Daesh make Takfeer of someone:

– they carry out capital punishment for apostasy by being shot to death.
– they take his wealth as spoils of war for the stockpile reserves for the Muslims.
– they take the women folk of Shaam as slaves and they carry out lewd acts on them, with the argument that these women are what the right hand possess.
– it has also been affirmed that they carry out pedophilia with the children of the Muslims and refuge with Allaah is sought.

they are filthier than the Jews and Christians and more defiled than the saliva of dogs.

The Khawarij swear allegiance with the Shia against the people of Sunnah:

Today this is Daesh which takes oaths of allegiance with the Shia Nusayreeya.

– they fight against the people of Sunnah in the land of Shaam; they have no mercy upon the young, or old, or those of intellect, nor the insane, or a woman or a baby.
– they display the dead bodies of the Muslims and set fire to them.
– the Hadeeth mentions: ‘The Prophet – alayhi salat wa sallam – prohibited mutilation and displaying the dead body.’

‘When he would appoint a leader, he would advise him with having Taqwa of Allaah. He would say to them go to battle, do not be treacherous, do not mutilate and display the body, do not kill a woman, old person nor a child.’

The Khawarij hate the leaders of the Muslims and they make Takfeer of them:

– the Khawarij were not pleased with the authority of the Amir al – Mumineen Ali bin Abi Talib -RadhiAllaahu anhu.
– they broke their oath of allegiance. . . and they made Takfeer of him and those who were with him. . . .
– they waged war against him and they killed him treacherously when he came out to pray the Fajr prayer. 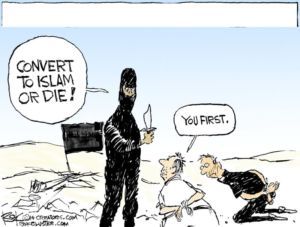 – ‘they make Takfeer of the rulers of the Muslims.’
– ‘they make their blood lawful to take.’
– ‘rather they make Takfeer of everyone who opposes them from the Muslims.’
– ‘they wish to remove the Islaamic countries, because they do not view them as Islaamic countries, rather they view them as countries of disbelief. This was the ‘Aqeedah of the destructive Sayed Qutb, a leader of the Takfeeris (those who excommunicate Muslims) of the modern times.

○ The Daesh forces consist of a number of nationalities from different countries, from them:

This is some of what I have heard about this misguided sect, dogs of the Hell fire. I ask Allaah Ta’ala to hasten their destruction.

[4] The description of the Khawarij:

[5] Excommunicating Muslims and placing them outside the fold of Islaam.
See: http://followingthesunnah.wordpress.com/2008/02/02/warning-against-the-fitnah-of-takfeer/